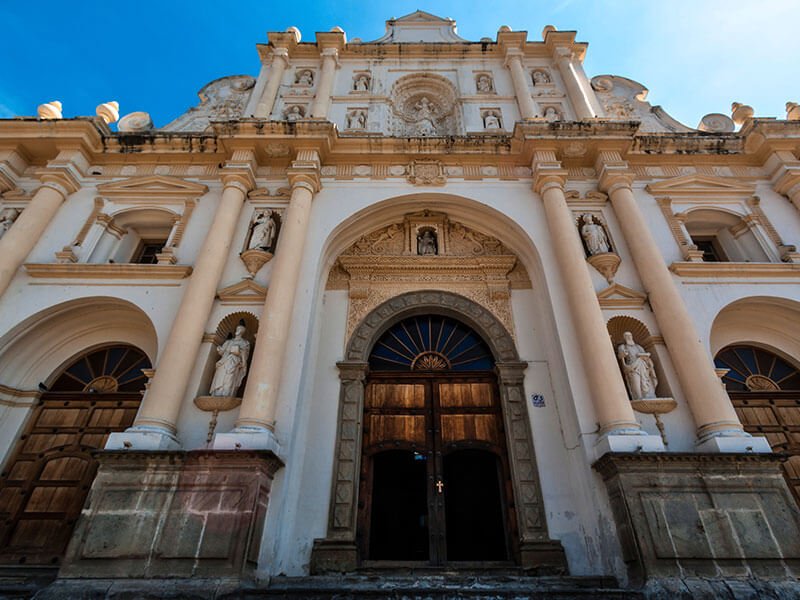 Religious tourism in Guatemala is one of the richest experiences for foreign visitors and can be enjoyed throughout the country. In addition, its rich history envelops visitors in a unique, mystical atmosphere.

You can participate in pilgrimages for Christians, such as the pilgrimage to visit Hermano Pedro de Bethancourt who was a Religious of the days of the Colony and who was canonized in 2002.

Holy Week in Guatemala is an awe-inspiring mix of symbols, sounds and aromas. Colorful carpets made of dyed sawdust, flowers, foliage and grains, perfumed by the smell of incense in the air, mark the way of the traditional processions of the season in cities and towns. Holy Week has become one of the tourist and religious attractions that are most memorable and sought-out by tourists from around the world, many of whom come year after year to participate in the religious liturgies or simply to enjoy the sights and sounds.

Religion in Guatemala has over 400-year-old traditions and pilgrimages that follow different paths. Central Americans and Mexicans participate in many of these pilgrimages in Guatemala.

Esquipulas is an emblematic city in religion and for religious tourism. It welcomes approximately 3 million visitors yearly. Every year, a record 32 traditional national and foreign pilgrimages to Esquipulas are organized. The Basilica of Esquipulas Cathedral is home to the Black Christ of Esquipulas, a wooden image termed “black” because, over the course of 400 years of veneration, its wood has acquired a dark coloring.

Visits to basilicas or sanctuaries are popular in departments such as Chiquimula, Alta Verapaz, Quetzaltenango and Antigua Guatemala. These visits, surrounded by an aura of mysticism, offer history, architecture and colonial beauty.

It is a journey of spiritual and mystical reflection. Which represents the places where the Holy Brother Pedro of San José of Betancourt, carried out a diversity of works and activities to help abandoned and poor people. Which was the scene of his life; this can be known through the route of the Pilgrim of la Antigua Guatemala.

It was the first place where Saint Brother Pedro worked. He entered to the labor of fabric and rustic cloth, performing the trade of weaver, sharing his life with the almost 400 forced that came from the prisons of the city. Here he began his evangelizing task, and by example, he started teaching with love the devotional prayers and the Holy Rosary, urging his peers to rectify their mistakes to lead a dignified life. It is currently a private property and the ruins are closed to the public.

Founded by the first bishop of Guatemala, Monsignor Francisco Marroquin, approximately in 1553 to serve Spaniards and mulattos under the care of the religious of “San Juan de Dios”. Here the Brother Pedro was held to recover after walking the road between Puerto Trujillo in Honduras and Santiago of Guatemala. The building was severely damaged by the earthquakes of 1773, which caused its abandonment. It is currently a private property and there is no public access.

It was built in the place it occupies today. The Holy Brother Pedro attended this church to pray before the Blessed Sacrament, mainly at night. The monument can be visited every day from 08:00 to 18:00 hours. The entrance to the place is paid.

In the year 1625 operated the fourth largest school with the name of San Lucas School. This institution granted academic degrees to students in Theology and Philosophy. Brother Pedro entered the school with the intention of being a priest, but difficulties with studying, learning Latin and the lack of identification documents, made him give up. Father Manuel Lobo, a Jesuit priest was a confessor, spiritual guide and executor of the testament of Brother Pedro. T

he mural painting of the Temple is considered the most extensive in the ancient Kingdom of Guatemala. The Ibero-American Training Center and the Workshop for Workers, both of the Spanish Agency for Development Cooperation, currently operate here.

The current building was inaugurated in November of 1743, at the site where the previous buildings of the city council were. On April 7 of 1799, it became the headquarters of the municipality of La Antigua Guatemala. On the top floor of the palace is the Main Hall or Hall of the Cabildo, whose main furniture is of the chairs and table that the Municipal Corporation occupies during the ordinary sessions and protocol acts.

The chair for the Municipal Mayor has a carved backrest with a commemorative inscription to the Holy Brother Pedro who exalts his life, virtues, and works.

The Cathedral witnessed the expressions of fervor of Saint Brother Pedro towards the Blessed Sacrament, during the procession of the Eight of Corpus Christi, which crowned the Main Plaza, revoked his cloak tied to a pole while dancing and reciting couplets in honor of Sacred Jesus.

It runs from North to South from the “San Francisco El Grande” Church to the Hermitage of “Santo Calvario”. It houses 10 chapels that mark the Via Crucis stations established according to the Franciscan tradition. It measures 1,322 steps, the same distance that Jesus traveled with the cross on Good Friday, from the Praetorium to Calvary.

The Holy Brother Pedro had a great devotion to the Passion of Jesus, as a penance on Friday nights, he dressed as Nazarene and carrying a heavy cross on his shoulders, he made his Way of the Cross, in the Street of Bitterness. Which currently is called the Street of the Steps, where he pondered the mystery of the Redemption.

Father Bernardino de Ovando, lived here, who was the spiritual guide of Saint Brother Pedro. When he died, many people wanted to express his veneration before his body, but since the nursing room of the House of Bethlehem was very small, Bishop Payo de Rivera determined that it was more convenient to guard it in the School of Christ Church.

The next day the procession went out through the Street of the Steps towards the Church of “San Francisco El Grande” to celebrate the Eucharist and bury it according to its will. Currently, the School of Christ is the seat of the Parish of “Nuestra Señora de los Remedios”. In its plaza, there is an Esquisúchil tree, planted in 1994.

It was built at the southern end of the Street of the Steps by the Franciscan tertiary in the mid-seventeenth century. In addition to living there for some time, the Holy Brother Pedro actively participated, performing the duties of supervisor and promoter of the work. In 1657, Pedro de la Rosa concluded the sculpture of the Holy Christ for the hermitage; the popular tradition calls him “The Christ of Brother Pedro”. On March 19 of that same year, Saint Brother Pedro planted the Esquisúchil tree in his gardens.

In this place, was founded the first hospital for convalescents in Latin America and the first school of first letters for poor children and adults. Site where love and care were lavished on the sick and destitute who came, searching for comfort.

At the west is located the old Plaza, where afterwards the Plaza of Peace and the monument to Saint Brother Pedro with a plaque containing a prayer of Saint Francis of Assisi were built.

In this temple of the Beatas, settled down the Betlemite Sisters. The front of the temple has in the niche the figure of the Holy Brother Pedro in an attitude of devotion towards the birth of Jesus.

The first contains vestiges of the splendor of the Franciscan Temple; the second has the offerings that the faithful people dedicated to him and the third keeps the relics and the portrait painted by Antonio Montufar, considered the oldest and most faithful in terms of physical appearance.

Today the social works occupy the old hospital for the clergy of St. Pedro the Apostle. Here, the Holy Brother Pedro visited the clergy who were in poor health. The social works are administrated by the Order of the Franciscan friars, where medical assistance, educational-spiritual-religious-moral and social training is provided to low income people, which is why today it is the heart of evangelical inspiration of faith.

Esquipulas: Mesoamerican religious destination since the beginning of the colony, it receives a big number of group excursions and pilgrimages that have a common purpose (devotion or penance). It offers different accommodation options, places to visit, food services and handicraft sales in general. Within the traditions of pilgrimage marked for years, this pilgrimage has been recognized as the Pilgrim´s Holy Route, where the faithful devotees have made walks with songs and prayers until they meet their Lord of Esquipulas.

With tradition of more than 400 years of Pilgrimages, they have arrived from various geographical points of Mesoamérica towards the Religious Destination of Esquipulas. Using different access routes and different means of mobilization. Being the most traditional and recognized in recent years and since the decade of 1970, the asphaltic route to the Atlantic that covers much of the old Royal Road used during the colony.

With an annual average visit of 1.2 million Pilgrims who pass in front of the Camarín of “Santo Cristo” in the Basilica and an estimated 3 million annual visitors to the city of Esquipulas in general, 32 traditional national and foreign pilgrimages are registered. An estimated of 60% of them pass through the CA-9 and CA-10 routes, considering the traditional points of their origin and arriving from various points of Guatemala, in addition to the neighboring countries of Mexico, Honduras and El Salvador throughout the year.

It cannot be discarded the tourist and merchandise traffic that circulates daily to or from the borders of “El Florido”, “Agua Caliente” and “La Ermita”. As well as the one coming from various regions of Guatemala through Las Verapaces, the Guatemalan Caribbean, Petén, the rest of the East region and the capital city of Guatemala, where traffic comes from the West and South regions of the country. Holy Pilgrim Route integrates 13 municipalities linking 3 departments of the Mystical and Natural East Region, which are El Progreso, Zacapa and Chiquimula.

Other activities in Guatemala

Guatemala is one of the most modern cities in Latin America and has positioned itself in recent years as a destination for world-class health and wellness tourism services.  The wellness services offered are highly competitive and that’s why the country hosts more and more travelers in search of health sanctuaries.  This is combined with unique scenarios, providing highly qualified and trained personnel who offer a warm and personalized treatment.

You can enjoy all this surrounded by exotic landscapes of forests of millenary trees that gave rise to advanced civilizations that held strong connections with the universe.  You will also enjoy volcanic sand beaches and a privileged climate that allows to experience the scent of flowers, and the aroma of cocoa, coffee and cane to complement the unique sensory experience.  All this and more are the experiences that Guatemala’s atmosphere offers in wellbeing.